REVIEW: Stay With Me and My Sister, the Serial Killer

Last February, I read two unique and surprising debut novels about family relationships by Nigerian authors. I have never read anything like either of these books before.

Stay With Me by Ayobami Adebayo is the story of Yejide and her husband, Akin, who married for love and want to break from the tradition of polygamy. But when Yejide is unable to get pregnant, Akin’s family pressures him to take a second wife. The characters are so complex… the events are unforgettable. I felt so many emotions reading this novel. I’m looking forward to reading anything this author writes.

“Yejide would have a child and we would be happy forever. The cost didn't matter. It didn't matter how many rivers we had to cross. At the end of it all was this stretch of happiness that was supposed to begin only after we had children and not a minute before.” 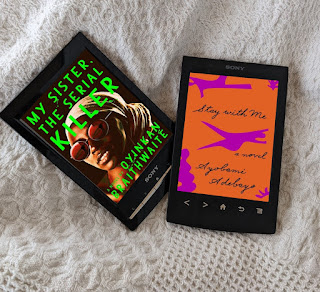 My Sister, the Serial Killer is darkly humorous and violent as hell. It is about unattractive Korede and her beautiful sister, Ayoola, who murders the men she dates. The stakes escalate when the doctor Korede is attracted to shows an interest in Ayoola. I listened to the audiobook – it was superb.

My Sister, the Serial Killer