Circe by Madeline Miller is a retelling of Greek myths from the point of view of Circe, daughter of the god Helios. I loved the title character, and I loved that she was reimagined as a relatable and complex character, rather than simply a villain.
Circe is a misfit. She doesn’t get along with her family, she has a hard time following godly protocol. Zeus banishes her to an island, where she spends a lot of time with her own thoughts.

But she also has some adventures. She evens the score with Zeus by having a fling with his son. She falls in love, has a child, makes some interesting friends and remarkable enemies. She turns some men into pigs (they deserved it). ⁠

Circe may have been a goddess, but the best part about this character is her humanity, her compassion, and her longing to be accepted for herself. She is one of the best characters I have encountered in a while. I felt all the emotions through Circe’s loneliness, struggles and joys.⁠

I loved the deliciously descriptive writing, and I especially recommend this one on audio. ⁠ 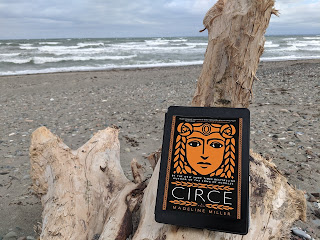